I did so many important things this weekend! And now, unfortunately, I’m going to tell you about them.

Somebody that I live with was in Vegas. I was all alone. This is how I live!

I poached four eggs. Not at once.

I ate asparagus for BREAKFAST. I know. What.the.heck. This is so unlike me. I’ll explain later. And no, I am not with child.

I made the executive decision to THROW away that freaking magic bullet blender that I loathe. My feelings came to a head after it took 18 (yes… seriously 18) minutes to blend the ice in my smoothie, and in my first gulp I got a piece of some disgusting, chewy scum that was hiding underneath a blade or something and lived through multiple hand washers and dishwasher cycles.

Ugggh. My skin is crawling just thinking about it. So I went out and bought a new blender, then slammed that piece of junk right into the trash. Hard.

I did a laundry load of towels. This? Huge deal. It’s often a stand off to see who will cave first and throw them in the wash. Actually, that’s totally a lie. There is no stand off because my husband knows that I surely won’t ever do them. He so kindly takes care of it.

I became addicted to yogurt pretzels. Really, this addiction started while I was in Florida… but now they are all I can think about. I mean… allllll I can think about. I bought some at Trader Joe’s on Friday and ate like, half the bag on my ride home. Then I curiously decided to take a peek at what a serving is of these so called “yogurt” pretzels… and it’s eight freaking pretzels! I ate eight pretzels in one HANDFUL. Whatever. We all know this whole yogurt business is just code for deliciously addicting white chocolate.

I killed about six thousand ants, four spiders and three stinkbugs. Then I went to Target to buy bug spray, spent $150 and left without bug spray. Oh but I did buy four pink bowls. That’s like the same thing.

So… phew. Monday is here and I’m spent.

The only other thing I did was make this gourmet food recipe, Thai chicken enchiladas because I thought I would win the wife-of-the-year award (this should include shoes)… but then I ate them all. I pretty much survived on enchiladas for breakfast, lunch and dinner… leaving nothing for my tired and heavily hungover husband when he returned home. Except a few yogurt pretzel crumbs. And well, that was like four hours ago so now? Yeah. There is really no food for him.

But let’s talk enchiladas. Swimming in coconut milk and red chili sauce, these are packed with chicken, shredded cabbage, carrots and onions, and a hefty handful of crushed peanuts and cilantro. I think the whole addition of peanuts is one of my favorite things about Thai food, and they take these to the next level. Feel free to add in any other favorite flavors of your choice, but these are packed with a sweet, tangy and slightly spicy punch. Clearly I liked them a little too much.

Spray a 9×13 baking dish with nonstick spray. Whisk together remaining coconut milk and sweet chili sauce. Pour about 1/2 a cup or so on the bottom of the dish. Slightly warm tortillas if desired to make them more pliable, then place a few spoonfuls of the chicken mixture in each, rolling up tightly and placing in the dish. Cover with remaining coconut milk and chili sauce mix. I usually take a spoon and cover every inch of the tortilla with the sauce, just to make sure it’s coated.

Bake for 20 minutes, then remove and top with additional peanuts and cilantro. Since sauce is not as thick as traditional enchilada sauce, when you remove them from the oven, spoon sauce from the bottom of the dish all over the tortillas. Additionally this can be done halfway through cooking too.

Notes: I use Trader Joe’s sweet chili sauce, but you should be able to find it in the international aisle of most grocery stores – I believe the most common brand is Thai Kitchen. I do suggest tasting the sauce first and adjusting accordingly from there so the dish works with your desired spice level. If you an unsure of what to do with your leftover coconut milk, make pancakes, hummus or brussels sprouts!

Slow cooking and chicken are two of the most compatible words in the busy cook’s cooking dictionary. It’s music to her ears. Slow cooking involves the preparation of hot dishes in advance. Just put the ingredients on the slow cooker, season, turn it on and return to it for dinner. Preparation of dishes in a slow cooker should be fuss-free and quick. 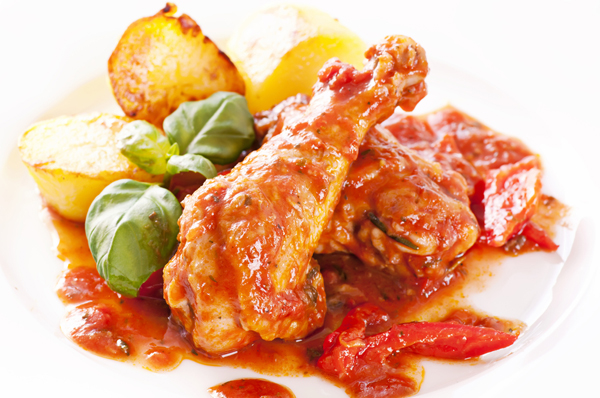 Although some recipes need sautéing of ingredients before putting into the pot, the effort required, if at all, would be worth the depth of flavors you’ll get from that. Like the slow cooker, chicken requires minimal preparation and just the right bit of attention and you get yourself a nice, hearty meal at the end of the day.

The gift of the slow cooker chicken is a hot meal to share with the family, without having to slave on it for hours. Since it’s slow cooked, all the flavors are intensified inside the pot. The chicken is moist and tender and so will the vegetables. The sauce or broth that results in slow cooker chicken is as delicious as the meal you’re making. Just remember to season it well with salt and pepper as well as your favorite herbs and spices.

Slow cooker chicken can also make use of noodles for a hearty noodle soup. The chicken is shredded and returned to the pot before the final hour of cooking. Noodles like whole wheat or regular ones are added after the long hours of slow cooking so it doesn’t disintegrate. The broth will lend its flavor to the dish and would taste as if you’ve done a Herculean task in cooking it. But in reality, slow cooker chicken recipes are simple and delicious, without you working too much.