Cassava, that lowly tuber you’re most likely to find in Asian groceries or markets, can be made into a cake. It is a woody shrub where the starch that is used to produce tapioca are derived. Cassava cake is a popular dessert made from grated cassava. Though cassava cake vaguely resembles the delicate, soft cakes common in Western countries, it is nonetheless an gratifying dessert. 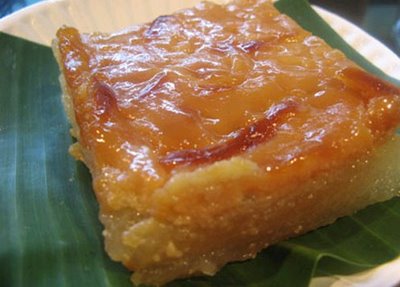 Cassava cakes are usually fixed in Asian kitchens whose traditions are more of the rice cake varieties. In the Philippines, where it is ordinary, cassava cake is a moist, soft cake with a light translucent color swirled with hints of caramel (from the sugar, coconut milk and butter). Its texture is a bit sticky but firm due to the cooked cassava, sometimes emphasized by thick strands of fresh coconut.

The cassava cake does not have flour or baking powder on its ingredients list. Instead, it is the cassava itself that acts as the binder, flour, and main ingredient. According to the Encyclopaedia Britannica, “cassava (Manihot esculenta), also called manioc, mandioc or yuca, is a tuberous edible plant of the spurge family (Euphorbiaceae) from the American tropics. It is cultivated throughout the tropical world for its tuberous roots, from which cassava flour, breads, tapioca, a laundry starch, and even an alcoholic beverage are derived. Cassava probably was first cultivated by the Maya in Yucatán.”

In the Yucatán as well as in Jamaica, instead of the sweet, caramel-like rice cakes, the cassava is made into flat cakes. In Belize, cassava flour is made into a cake with coconuts and raisins, as cited in Wikipedia. But to make anything out of cassava, it must first be peeled, cleaned, grated and removed off its sap (or juice from the roots) before cooking. This is because the tubers have a sugar derivative (or acid) that produces a poisonous substance (most specifically cyanide), which must first be removed through refinement.

If you will look at cassava cake recipes, especially in the Philippines, the cassava is indeed thoroughly cleaned before using. Grating the cassava helps in pressing and squeezing out the substances. It is then mixed in a bowl together with three kinds of milk (evaporated milk, condensed milk, and coconut milk), sugar, eggs, and thin strips of fresh young coconut. The texture of the cake varies with the amount of liquid that is cooked with it. If the mix is more concentrated and with a lot of the grated cassava, the cooked cake is firmer, more chewy and quite filling. If the mix is watery and with not a lot of cassava, the texture is soft and spongy. The cooking time is much longer, though. The cassava cake mixture can then be baked in an oven or steamed. In some recipes, a caramel-like topping is prepared to give the cassava cake that delicious finish.